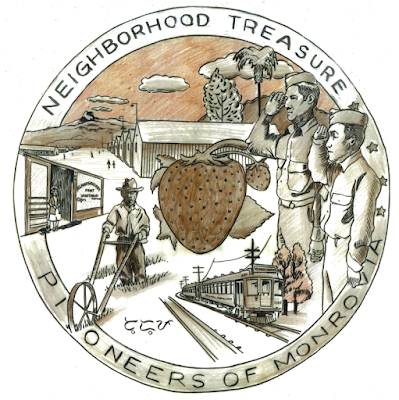 At its next meeting the Monrovia City Council will ...

~ Consider spending up to $15,500 for a plaque commemorating Monrovia's Japanese American community, the latest in the Neighborhood Treasures series. Called "Pioneers of Monrovia," the plaque, which will be mounted on a post in a neighborhood near Huntington Drive "commemorates the history of Japanese Americans in Monrovia, who made significant advancements for local agricultural and business interests." It also remembers their internment after the attack on Pearl Harbor during World War II. Ten proposals were submitted and the Allocation of Art in Public Places Committee unanimously selected the proposal by Maryrose Mendoza. Installation is scheduled to take place the week of May 13. https://goo.gl/bcYfXS

~  Hear a report on a proposed bill by Senator Kamala Harris, which would mirror Congress member Judy Chu's proposal in the House of Representatives, to create a recreation area in the mountains behind Monrovia, and which would overlap a bit into the city itself. https://goo.gl/cTkEmV