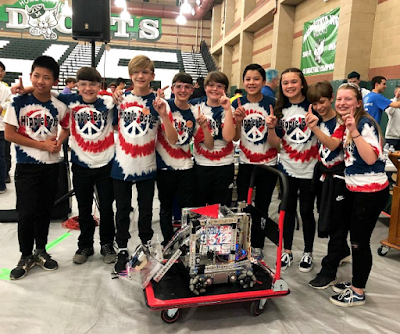 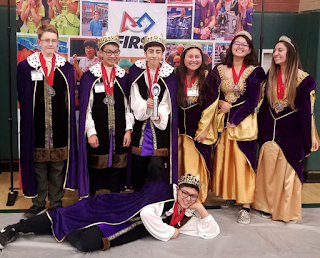 The Kings and Queens

On Saturday March 10th two student robotics teams from Monrovia schools emerged as the victors of the SoCal Region FIRST Tech Challenge (FTC) Regional Robotics Championship held at Monrovia High School. The competition featured the top 48 teams from the SoCal region, which stretches from Santa Barbara to the San Diego County border. Those teams were competing for 7 coveted advancement slots to move on to the FTC World Championship to be held in Houston, TX on April 17-20. After a grueling day of competition an alliance made up of Kings and Queens, Hippie Bots, and team Brain Stormz of Camarillo overcame mechanical failures and fatigue to not only win the event, but also put up two of the top 10 match scores in the state for this season. Out of over 7,000 FTC teams around the world, only 320 qualify to compete in the World Championship, and only 148 advance from performance on the competition field.

Each FIRST Tech Challenge student team designs and builds their own robot each season from aluminum shapes, metal and plastic sheet, and customized machined metal and 3D-printed parts. Robots compete in teams of two in "alliances" against other pairs on a 12 by 12 foot field to see which alliance can complete the most game tasks in a 2-1/2 minute period. Before the start of the match the robots have to fit into an 18x18x18 cube, but can unfold and expand to any size once the match begins. This year's game "Rover Ruckus" has a space theme where robots act as though they are exploring a distant planet and navigating obstacles to gather mineral samples and claim territory by dropping a team flag in a designated spot. In matches the robots are required to detach from hanging above the field surface on a raised hook on a simulated planetary lander, identify objects on the field by color, and navigate accurately around the field to park in a simulated "crater." Then the robots collect plastic cubes and ball "minerals" from inside the crater, separate them, and deposit them into storage hoppers in the lander 30 inches off the floor. Finally the robot has to reattach to the hook on the lander and raise itself back above the surface to prepare to return to Earth. All this while coordinating with a partner robot and while sharing the field with an opposing team of robots intent on accomplishing the same tasks.

Though each FTC team designs their robots to accomplish the same objectives, the robot they design and the team's choice of name and identity are distinctly different. The Monrovia teams are no exception. The Kings and Queens are true to their name and compete resplendent in purple and black renaissance costumes with gold crowns for the boys and eyecatching purple and gold dresses and gold tiaras for the girls. Their robot, named "Sir Gawain" is striking for his regal purple and gold livery and for his elegant design. The Hippie Bots sport a red-white-and-blue tie dye look harking back to the 1960's. Their robot, named "Bot Marley," is a purposeful square design that is all business. Both robots are strong performers. This marks the fourth year that Monrovia High School's nine-year-old FTC robotics program has sent a team to the World Champions. This is the first time Clifton Middle School has advanced a team. The success of the Kings And Queens and Hippie Bots caps a strong year for the robotics programs of the Monrovia School District which fields ten FTC teams, six at Monrovia High and two each at Clifton and Santa Fe Middle Schools. Of the ten Monrovia teams, five qualified as one of the 48 teams that advanced to the Regional Championship. The Kings and Queens and the Hippie Bots are actively seeking tax-deductible donations and company sponsorships to help cover the approximate $17,000 cost each of taking the teams to Houston in April. Donations may be made through their GoFundMe pages at https://www.gofundme.com/kings-and-queens-to-worlds-2019 or https://www.gofundme.com/hippiebots2019