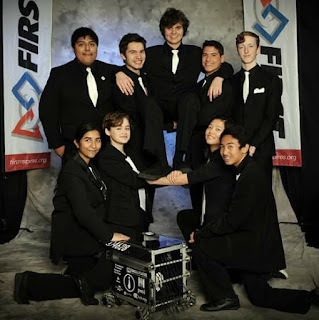 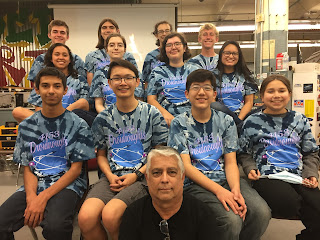 For the first time the Monrovia High School robotics program will be represented by two teams at The FIRST Tech Challenge World Championship in Houston, TX. On April 18 the Droidnoughts and the Suitbots will travel together to Houston to compete against 130 robotics teams from around the world.

The Droidnoughts also advanced to the LA regional championships. They were one of 20 teams from the western United States to receive an invitation to the World Championships through the First Tech Challenge lottery process.

Monrovia Robotics is an after school program that participates in the FIRST Tech Challenge where students come together to design, build, and program robots to compete in a game that changes each year. Each team is led by an adult mentor who guides them through the process. FIRST robotics has been described as a sport for the mind and is an all encompassing STEM activity.  In addition to building the robots, teams also compete in the ability to inspire, community outreach, connections to the engineering community, innovation, design process and programming skills, which are documented in an engineering notebook.

FIRST (For Inspiration and Recognition of Science and Technology) is more than just building robots. The mission of FIRST is to inspire young people to be science and technology leaders, by engaging them in exciting Mentor-based programs that build science, engineering, and technology skills, that inspire innovation, and that foster well-rounded life capabilities including self-confidence, communication, and leadership.

Please support Monrovia's effort to send these outstanding robotics students to the World Championships in Houston. We have created a GoFundme account (https://www.gofundme.com/mhs-robotics-worlds-2017) where we are accepting donations. Or you can contact the Monrovia Robotics program coordinator, Tom Dobson (tdobson@monroviaschools.net) for information on how to make a tax deductible donation or a donate by check.