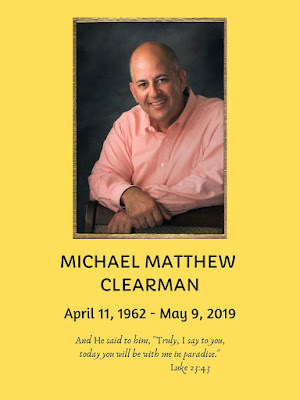 Michael Clearman was an incredible person. He was an Attorney. A pilot who was building his own airplane. He was the president of his EAA aeronautical club. Flying brought him great joy! He gave hundreds of airplane rides to youngsters in a program called the Young Eagles. He was a sailor. He rode motorcycles his whole life. Was about to be the President of the Kiwanis Club. He served on the Board of the Monrovia Chamber of Commerce. He was in BNI, a business networking group, and was also on the Supervisory Committee of the Southern California Edison Federal Credit Union, which means he went to monthly meetings and helped make sure that the money was safe for every member of the credit union. His degree from college was in finance.

His heart was big and generous and he loved sharing his life and fun with his friends and colleagues. Plus, he hiked, biked and walked with his buddies most mornings. HE WILL BE MISSED!