Comment: Let's Not Overlook the Trades at Monrovia Schools 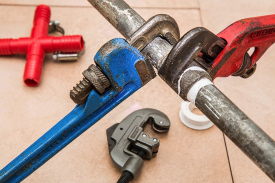 Recently I commented on some new tech-related courses at Monrovia High, saying, "Well, this is good, but it doesn't give me much confidence that there is any follow-through on the discussion before the election about science and tech not being for everybody. How about adding some classes for the trades: auto mechanics, electricians, etc.?"

Well, I got a response from a member of the district saying, if I may paraphrase, that the new Advanced Graphic Design, Web Development, and Game Development classes ARE trades because by taking them students can get good jobs without going on to college.

So why do I - who spent a career at tech companies - think the traditional trades are so important?

Well, suppose you are a computer graphic designer, web developer, or game developer. Who is your competition? I'll tell you who - Every other designer or developer in the whole big, wide, hungry world! Any job that can be done digitally can be done pretty much anywhere.

I know this because I've lived in the midst of it. I've watched programmers go from making well over $100,000 a year to being laid off. A nearby tech company I know recently laid off about a hundred programmers. At the same time the company is hiring programmers overseas.

So, these jobs are very easy to outsource to India or Ukraine, but also everybody and his brother's cat is being taught computer tech. I just saw an article called: "Coding for kindergarten." The concepts and tools for programming are being made simpler and simpler, which means more and more competition, even locally.

But suppose instead that you are a plumber, welder, or auto mechanic - someone who has to be physically at a location. Who is your competition? Probably nobody outside of maybe a 20-mile radius. You are NOT competing against the whole world. And when I talk to people in the trades they complain that they can't get enough workers.

So while I don't want to demean tech jobs, and I think, in particular, that the robotics teams in the Monrovia schools are really great, I think we are giving the trades - in the traditional sense - very short shrift, and I think in fairness to our students who do not want to go on to college that we should offer them training in skills that cannot be done in India or the Ukraine for a quarter of the cost they can be done here.


Update: Oh yeah, I wanted to add this joke:

Man gets a bill from his plumber.

Plumber: "Yeah, I didn't make that much when I was a lawyer either."