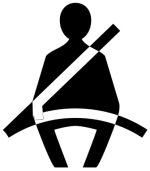 From May 20 to June 2, Monrovia Police Department will have additional officers on patrol looking for drivers and passengers who are not buckled up, including drivers who do not secure children in child safety seats. The enforcement effort is part of the national Click It or Ticket campaign focused on increasing seat belt use.

“Seat belts have proven time and time again to be life-savers,” said Sergeant Chad Harvey of the Monrovia Police Department. “Buckling up should be second nature.” At 96.2%, California has one of the highest seat belt use rates in the nation. However, 532 people killed in crashes statewide last year were not wearing a seat belt.

“Putting on a seat belt takes a few seconds and is your best protection in a crash,” said Sergeant Harvey. “We want everyone to be as safe as possible when driving or riding in a car, and wearing a seat belt is the easiest way to do that.” In California, the fine for a seat belt violation is $162, and $490 for failing to secure a child in the proper safety seat. Under California law, children under two years old, 40 pounds and 40 inches are required to be in a rear- facing car seat. Children under the age of eight must be secured in a car or booster seat.

California has a primary seat belt law, which allows law enforcement officers to ticket someone for not wearing a seat belt without committing another traffic violation.

Funding for Click It or Ticket enforcement efforts is provided by a grant from the California Office of Traffic Safety, through the National Highway Traffic Safety Administration.