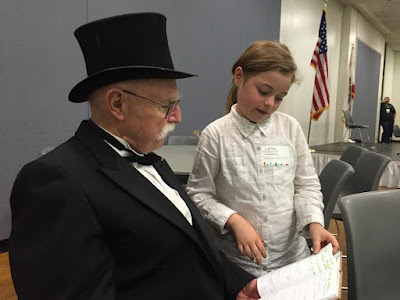 Monrovian Steve Baker has just been notified that he will receive the 2018-2019 Waddingham/Doctor Award by the Conference of California Historical Societies, awarded to an individual who has given 25 years or more of consistent and outstanding service to a local historic society.

Steve is a fifth-generation Monrovian who was appointed the Official Historian for the City of Monrovia in 1991, was elected Monrovia City Treasurer in 2005 and was re-elected in 2009, 2013, and 2017. He has been the Treasurer for the Duarte Historical Society and Museum for more than thirty years, he currently serves as President of the Citrus College Foundation Board of Directors, President of the Monrovia Historical Society, Treasurer of the Friends of the Monrovia Public Library, and as board member of the Monrovia Historic Preservation Group, ChangeMakers and the Santa Anita Family YMCA.

In the past he has served as chair of the Santa Anita YMCA Board of Managers, President of the Monrovia Historical Museum, Treasurer of the Friends of the Duarte Library, member of the Historic Preservation Commission, and Treasurer of St. Luke’s Episcopal Church. He was also the Executive Secretary of the Rotary Club of Monrovia for seventeen years.

Thanks to Sandy Burud for this information.