Review of ‘Renaissance Years: A History of Modern Monrovia’ 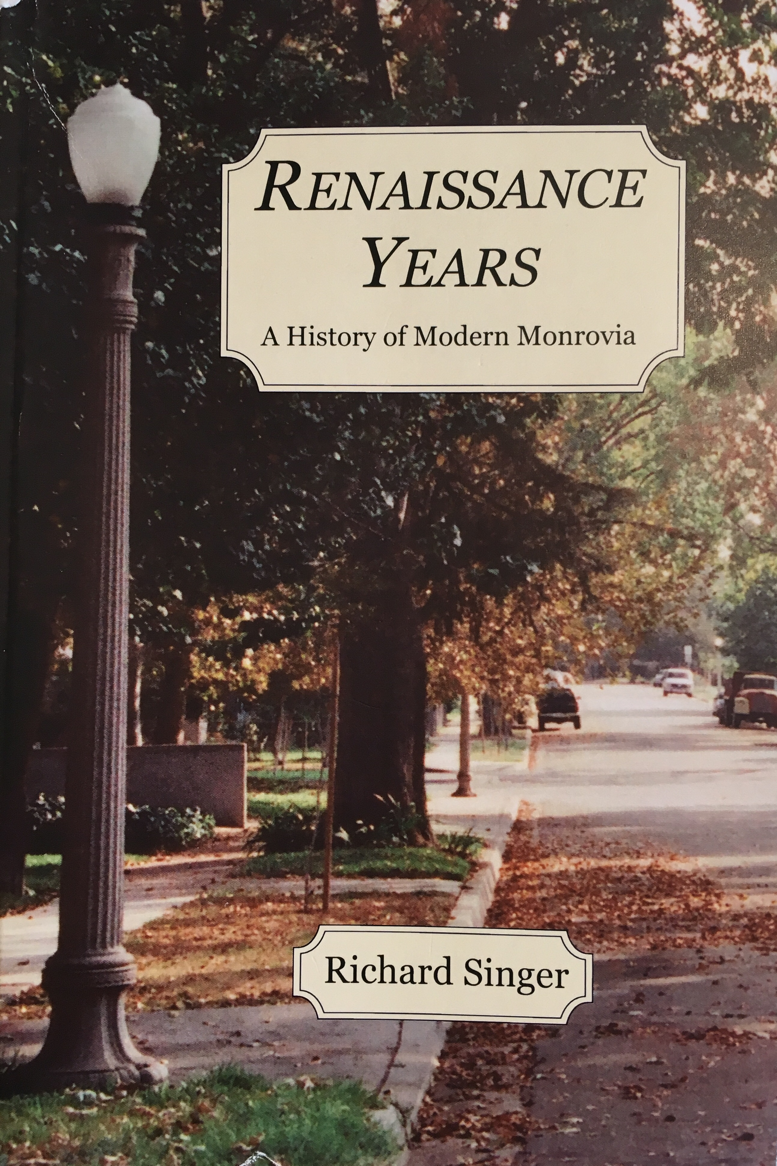 Many years ago I was attending a city-sponsored meeting in Arcadia as a reporter for the Arcadia Tribune newspaper. At this meeting a prominent Arcadia businessman exploded in frustration: "Why can't we be more like Monrovia!?"

Well, the just-published, Renaissance Years: A History of Modern Monrovia, by Richard Singer, explains what happened in Monrovia that made Arcadians envy us.

Singer is well positioned to write this history as he is a former public information officer for Monrovia, and before that executive director of the Monrovia Chamber of Commerce, and before that editor of the Foothill Intercity Newspapers, four newspapers, including the Monrovia News-Post and the Arcadia Tribune. (I worked as a reporter for him just in case you want to adjust your assessment of this review.)

This is not a coffee-table picture book, it is a scholarly 369 pages (or 407 if you include references and index) of mostly text, though it does include a nice selection of pictures. It is well researched and nicely written.

It is also opinionated, though in a mild way, but you probably won't have trouble determining Singer's estimate of people (for example, I don't think he and Richard Mountjoy ever got together for a casual beer and a laugh), but he warns you in the introduction that this will be the case. He writes: "There may be times when you'll find yourself thinking, 'Well, that's his opinion,' and you'll be right. It is."

The book traces Monrovia from its beginnings to 2017, focusing initially on race relations since they - along with economics - played a part in creating the problem that Monrovia not only recovered from, but soared above.

But that is just setting the stage. The meat of the book is the story of the politics of redevelopment and to a lesser degree of reform at the school district.

I learned a lot. For instance:

- How a saloon and local Baptists hurried Monrovia along the path of incorporation.

- How Monrovia butted in front of a line of about 200 people (literally, not figuratively) to get a grant. Hmmm. Effective but doesn't seem exactly cricket.

- How Director of Community Development Don Hopper ordered the utilites turned off for a recalcitrant business on Huntington Drive, but accidentally gave an address on Foothill Boulevard, a building that belonged to ...

- How Monrovia came to have a directly elected mayor (most cities our size just rotate the mayor's office among the council members).

- About a candidate who had a stroke during a candidates forum, and later died from it.

Notice I'm not telling the whole story? That's so you'll buy the book.

Anyway, Renaissance Years is a great, professionally written record of the politics of a very important period in Monrovia history. Though some may disagree at points I would not quibble about the elements of the story I know first-hand, though there were instances where I believe there was more that could be said, but ... well ... it's already a pretty big book.

Finally, though it is very well written, I still think the best thing Singer has written was a column for the Monrovia News-Post about buying his wife a B-29 bomber control stick for her birthday. Maybe that will be in his next book.