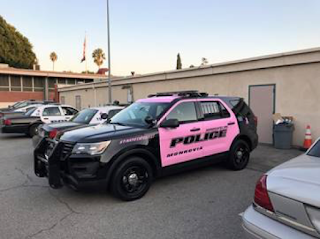 ~ The city had one of its police cars wrapped in pink to support  the Pink Patch Project, which raises awareness for breast cancer research.

~ The fire near Mt. Wilson is nowhere near Monrovia, and "there is no direct threat to our community now." Still, the city has closed Canyon Park and the Hillside Wilderness Preserve (except for people who have rented a facility or are on a guided tour) but hopes to reopen them tomorrow ... at least if the fire is out by then. "Based on the latest reports we have received, the fire should be put out by this afternoon."

~ With the upcoming retirement of Police Chief Jim Hunt and Captain Nels Ortland and the appointment of Captain Alan Sanvictores as the next police chief,  Lt. Heath Harvey and Lt. Roberto Wilken have been promoted to captain.  Heath  will command the Operations Division, while Roberto will oversee the Services Division.

~ Studio Movie Grill (the former Krikorian Theater) plans to install high-backed recliners within the next week or two. The job should be done within 6-8 weeks. Also, in early 2018 the company plans to convert one screening room to a full kitchen, so there will be 11 screens.

~ The installation ceremony for new Monrovia  Chief of Police,  Alan Sanvictores is scheduled for 6 p.m. on Nov. 7, just before the City Council meeting.

~ Police Agent Michael Garcia, and Fire Captain Brannigan Scott will be recognized  at Congressmember Grace Napolitano's Community Prayer Breakfast, on Nov. 17 at the Pacific Palms Resort in the City of Industry.

~ This year 28 merchants will participate in the Old Town trick-or-treating program, "Halloween Spooktacular." They will be identified on a map and will have a "Candy Stop" sign in the window.

~ Six new "Big Belly" solar compacting trash cans will be installed in late October in  the 100-200 block, 400, 500, 600 blocks and at Library Park. They'll be  wrapped in a collage of historical photos. They can hold five times as much trash, so they have to be emptied less frequently. Also, the cans send a note to city staff when they need to be emptied.