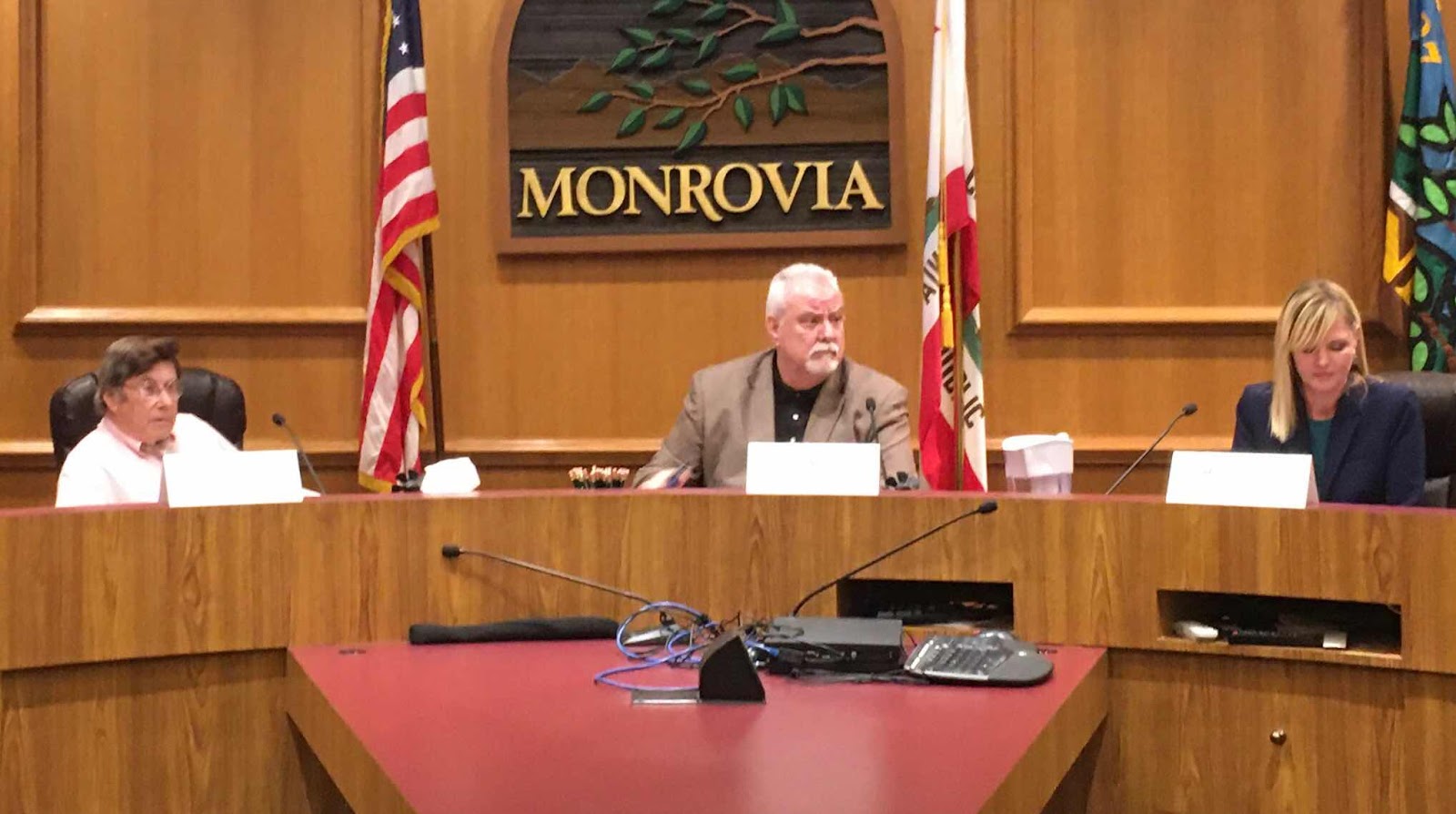 At the mayoral candidate forum, the topics were mostly housing and the environment.

Melissa Taylor focused on housing for the homeless. She has an urban regional planning background and said she would work for "bold change" and a "more inclusive community." She said she'd like to bring back trolleys to transport people from Station Square to Old Town. Also, she said the city is not representative of the population. For example, the city does not celebrate Cesar Chavez Day.
Stephen Grollnik said he does not expect to win, and said he and Adams are the old generation and Taylor is the new.

Tom Adams focused on his record. He said that when took over as mayor the city had 180 water leaks a year, but that problem is being fixed by "the largest public works project in Monrovia history." He added that the city has raised its bond rating to AA, second best, and asked voters to make a choice between "a steady hand on the wheel" and inexperience.

Adams said the price of housing is a result of supply and demand, and we need more supply. To minimize traffic congestion, he said, the new housing is being built near the train station. He added that  the city has provided housing for 23 homeless individuals, and "everyone has been offered" housing. The problem, Adams said, is that housing facilities have rules and some homeless people don't want to accept the rules.

Grollnik said we should keep  Monrovia a small community. The Asian population moving in has raised prices, and thus raised property tax. Regarding a question about providing low income housing, he said, "I don't believe in giving anything free to anyone." He said traffic is bad and he doesn't want Monrovia to be like "Temple City or Arcadia," and "I'm not a bigot," he added. Regarding providing homes for the homeless, he said, the city should get three trailers with beds and showers and park them in front of the police station.

Taylor said the city should focus on affordable housing and needs to reexamine its zoning to provide that housing. The city needs to add housing and needs more than 10 percent of it to be affordable. Monrovia needs to think strategically and have a traffic plan and battle gentrification.  Everybody, she said  deserves housing, that it is a human right.

What about mansionization?
Taylor: Maintaining historic housing comes down to affordable housing.
Grollnek:  "Keep the city the way it is."
Adams said he called for a moratorium on tearing down old houses until  new rules were put in place.

How can the city be more green?
Adams:  "Being green is great as long as it is economically viable."
Grollnek: "I don't care. The plastic bag ban was the dumbest thing I ever heard."
Taylor: Being green is a "huge" issue and the city needs to focus on it.

Vision for Old Town
Taylor: A lot of business are moving out and the city should be recruiting new businesses.
Adams: The city does recruit, but some landlords have "reached too high on rent." He said there are a couple owners who are adamant about what they want to charge and the city "can't force them to rent cheaper."  Also, online retail is a big factor.
Grollnek: Chinese buying properties is having an effect.

Gun Violence and Lighting
Grollnek: Monrovia is doing "pretty good." There has been gang violence in south Monrovia, but the police have done a good job with that.
Taylor: The city should work on this. She knows of a woman who was hit crossing the street near Kohl's, and suicide by firearms is a serious problem.
Adams: Some residents don't want street lights. They have been offered them and have declined in order to keep their streets feeling more rural.