Monrovia Representative to Citrus College Board to Be Honored 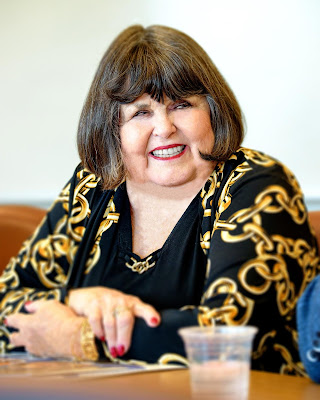 Joanne Montgomery, a long‐standing member of the Citrus Community College District Board of Trustees, will be honored for her many years of service during an upcoming conference of the Community College League of California (CCLC).

Next month, Mrs. Montgomery will be presented with a Fulfilling the Trust award during CCLC's 2019 Annual Trustees Conference. Designed to recognize the enduring dedication and service of California's community college trustees, the award is given to trustees who have achieved 20 years of service at a California community college.

"During her more than 20 years of service to Citrus College and the communities it serves, Trustee Montgomery has contributed greatly to the college's growth and progress. Her leadership has been instrumental in establishing Citrus College as a national leader in higher education," said Dr. Geraldine M. Perri, superintendent/president of Citrus College. "On behalf of the college community, I congratulate Trustee Montgomery on receiving this very special honor and thank her for the decades of guidance and vision she has provided."

In addition to her involvement on Citrus College's board, Mrs. Montgomery is active in her community, serving as a member of the Monrovia Chamber of Commerce and the chamber's BEACON (Business, Education and Community Outreach Network) Committee. She is also a member of the Monrovia Coordinating Council. She was previously on the board of directors of the Boys and Girls Club of the Foothills, as well as the board of directors of the 48th District Agricultural Association.

Mrs. Montgomery has also served her community as an educator. For 32 years, she worked as an elementary school teacher for the Monrovia Unified School District. She was also a master teacher for several universities and served on numerous school committees.

"I have always been passionate about empowering others and making a difference in my community,"

Mrs. Montgomery said. "It is an honor to receive a Fulfilling the Trust award from the CCLC. I am grateful for the continued trust my community has given me and for the opportunity I have had to serve Citrus College for so many years."

Mrs. Montgomery's passion for education and for giving back to the community has earned her several recognitions. Her many honors include a Teacher of the Year award, being selected as the 2003 recipient of the Dick Lord Award from the Monrovia Chamber of Commerce and being named the 2015 Woman of the Year for Monrovia for California's 48th State Assembly district.

"I am pleased that Joanne's service to California's community colleges is being recognized. Her enduring commitment to the community and to Citrus College is inspirational," said Susan M. Keith, president of the Citrus Community College District Board of Trustees. "It has been an honor to serve beside her on Citrus College's governing board, and I am certain my fellow board members join me in offering our most heartfelt congratulations."