Francisco and Felix Gutierrez to Be Honored With Neighborhood Treasure Landmark 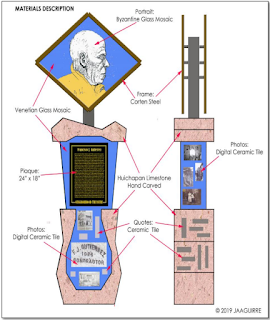 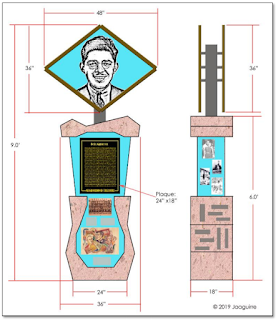 The next Neighborhood Treasure will be a four-sided statue honoring Francisco and Felix Gutierrez. It will be comprised of various materials, with two sides dedicated to Francisco and the other two to his son, Felix, to be placed at the southeast corner of Shamrock and Lemon.

The 1928 Monrovia Business Directory lists Francisco Gutierrez as one of only two Spanish-surnamed business owners, and he did a considerable amount of work to help build Monrovia. Of particular note, Francisco Gutierrez was responsible for installing the sidewalks around the former Monrovia Plunge (and the site of our current Monrovia Historical Museum), Immaculate Conception Church, and the tennis courts at Recreation Park, as well as at a number of private homes in the community. Common to that era, the company that poured concrete would imprint their business name into the sidewalk, and even today, there are numerous sidewalks throughout Monrovia with the Gutierrez imprint.

Francisco’s son, Felix J. Gutierrez, was born in 1918. Felix Gutierrez attended Pasadena Junior College to study art, and during that time, he started a newspaper called Mexican Voice. Launched from his home, Felix Gutierrez was the writer, artist, and editor of the paper, which provided an important voice for the Mexican American movement throughout the Southwest portions of the United States. In an editorial with political cartoons, Mexican Voice questioned the inequity that Mexican volunteers were considered “white” by the World War II draft board, but “colored” by school districts and neighbors. Felix Gutierrez’s efforts, through Mexican Voice, helped lead to the development of a better integrated, more tolerant and fairer society, both in Monrovia and beyond.