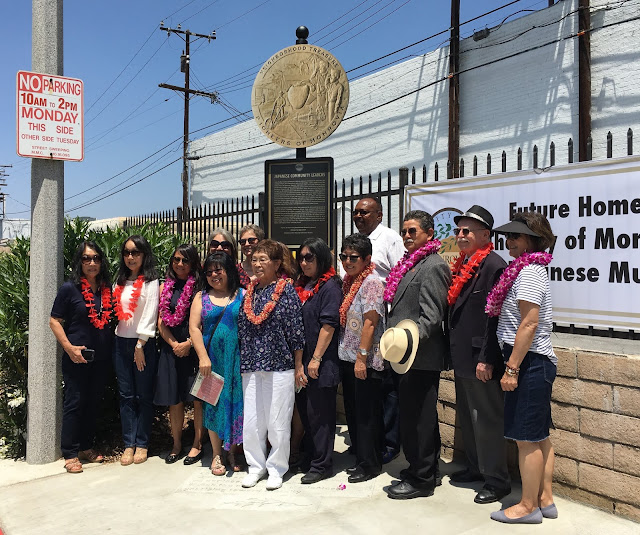 Monrovia unveiled its latest Neighborhood Treasure today at the corner of Magnolia and Cypress (a block south of Huntington). The plaque honors early Japanese Monrovians and features a strawberry (to remember the strawberry fields for which many Japanese in Monrovia were known), two servicemen (to honor Japanese who served in the U.S. military during World War Two, and a streetcar, to remember the early Red Car line that came to Monrovia.

The plaque is not actually the final bronze plaque - there was a delay in casting it - but is a plywood replica to stand in until the final plaque is completed.

Beneath the round emblem is a plaque stating:

Asian Pacific American pioneers in California often get overlooked. The early 49ers, the railroad workers, the farmworkers, and even the laundry workers built much of this Golden State. In Monrovia, Japanese Americans such as the Uyeda, Tsuneishi, Asano and Kuromiya families came to build farms, grocery stores, fruit stands and gardening businesses. Yutaro Uyeda, Monrovia's Strawberry King, first arrived in Monrovia on the Red Car. He employed many of his Mexican American neighbors. Satoru Tsuneishi attended Monrovia-Arcadia-Duarte High School and wrote beautiful haikus (a traditional form of Japanese poetry). Takumi "Tom" and Sakae "Mary" Asano ran a grocery store on Myrtle Avenue and were active in civic affairs. The Japanese Americans had community gatherings, and built a Gakuen school on Mayflower for their Nisei children (children born in the United States whose parents were immigrants from Japan). Regardless of their numerous contributions to local businesses and agriculture, none of these families were allowed to live north of Walnut Avenue.

In 1942, United States Executive Order 9066 authorized the internment of persons of Japanese ancestry, including American citizens. Some neighbors and friends in Monrovia hated to see this unjust evacuation. Many of the Japanese Americans from Monrovia were sent to Heart Mountain Concentration Camp in Wyoming. From Heart Mountain. the Tsuneishi family sent four sons into World War II combat and two daughters as civilian translators. Yosh Kuromiya of Monrovia chose to be a conscientious draft resister. After World War II, other Japanese American families also came to make Monrovia their home. They continued the stories of hard work, growing families, and forging a better community for all.