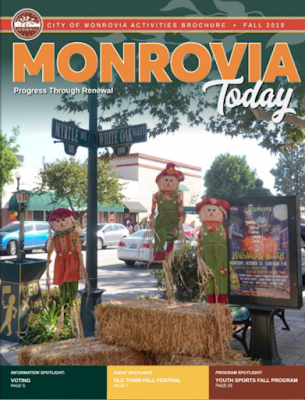 ~ The latest Monrovia Today magazine is out: https://is.gd/pQQSXL

~ "If all goes according to plan, we should be ready to make an announcement [about the permanent city manager] toward the latter part of next week, and an employment agreement with the final selected candidate could make its way onto the October 1 City Council meeting agenda for formal consideration.  If that timeline holds, then Monrovia's next city manager should be on board no later than mid- to late-November."

~ Coffee With a Cop. The Monrovia Police Department will be at the Starbucks on the corner of Huntington and Magnolia on Wednesday, Oct. 2, from 9 to 11 a.m., for National Coffee with a Cop Day.  No agenda, no distractions, no barriers... just coffee and conversation with Monrovia police.

~  The city is planning an outreach to persuade Monrovians to vote for Measure K, on the November ballot. If passed, it would max out the sales tax for the city so that when the county passes another sales tax measure it won't have any affect on Monrovia since we'll already be paying the maximum, and the money will stay in Monrovia. Outreach will include a water bill insert, presentations to boards, commissions, and community groups, and two community meetings: Oct. 19, 11 a.m. at the Community Center, and Oct. 22, 7 p.m. at the City Council Chambers.