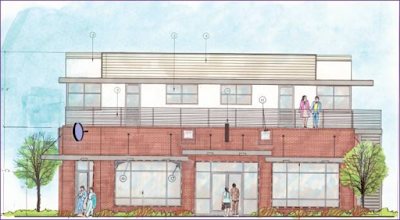 ~ The former Monrovia Market (which housed the much-lamented Market Grill) at Shamrock and Colorado, may be turned into an automobile museum, with two residential units on the to-be-added second floor. The city's Development Review Committee considered an application by Bowden Development to change the building into a Route 66 Automotive Museum / Special Event Venue.  The museum would showcase several 1950 classic cars and memorabilia owned by the late Fred Bowden, and could be rented out for private parties and gatherings on a limited basis. The application will be considered by the Planning Commission on September 11.

~  An organization called Backgroundchecks.org has listed Monrovia as the 39th safest city in California and the fifth safest in the San Gabriel Valley, ranking only behind Sierra Madre (7th), San Marino (12th), South Pasadena (24th), and Glendale (32nd).

~ Monrovia Public Library is one of 26 recipients of the 2020 Book To Action Grant awarded by the California Center for the Book. This grant lets Monrovia's Adult Services Team collaborate with community partners to create a dynamic series of events for adults and intergenerational groups across Monrovia. The program will revolve around The Hidden Life of Trees, by Peter Wohlleben, a New York Times Bestseller.