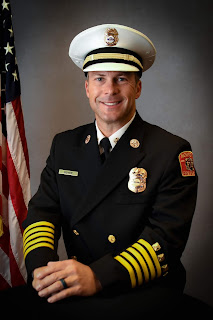 Brad began his career with Monrovia in 1994 as a fire cadet, and he was hired into a full-time firefighter role in 1998. Most recently, Brad was appointed the City’s Fire Chief in 2016, and since that time, he has been instrumental in advancing a variety of operational enhancements in both the Fire Department and throughout the City. Of particular note, one of the tangible results from all his efforts was the reclassification of the Monrovia Fire Department into a high class 2 rated operation by the Insurance Services Office, which ranks Monrovia Fire & Rescue in the top three percent of all fire departments across the United States.

“We are grateful that an individual of Brad’s quality and character is willing to step up and take on the additional responsibilities of serving as Monrovia’s Interim City Manager,” said Mayor Tom Adams. “The City Council has every confidence that Brad will be a terrific steward of our organization and community, and that Monrovia will have continued success during this transitional period.”

“I am extremely humbled to have the opportunity to serve the City of Monrovia in this interim capacity,” said Brad. “What an honor it is to work with so many dedicated and hardworking people that are all committed to making Monrovia the best place that it can be.”

As one of the few completely full-service cities in the San Gabriel Valley, Brad will be supported in his new role by a staff of around 300 full-time employees.

Brad holds a Bachelor Degree in Occupational Studies from California State University, Long Beach. In addition, this November he will graduate as an Executive Fire Officer from the National Fire Academy in Maryland. He has been married to his wife, Anne, for the past 21 years, and they have two 16-year old twins, Blake and Ella.