A Bear in a Car in North Monrovia 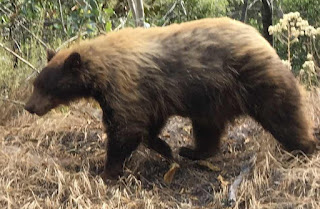 Jen Wang, posting on the Nextdoor social media site, tells about a bear that got stuck in a car in north Monrovia:

“Went to visit family on northern Norumbega tonight, and since they have a long driveway with a gate, we left our car unlocked when we went inside. A while later, we heard our car horn blaring, and came outside to find a bear in our car!”

The bear, she wrote, had opened the car door and gotten in, but because they were parked on a hillside, the door shut behind the bear, which was leaning on the horn.

"My father-in-law calmly opened a door and backed away, and the bear ran away, no harm done.

"There's only minimal damage to the car, but just FYI, if you're hanging out near the foothills, it might be best to treat your car like you're camping! My advice would be to keep your food, trash and snacks in the car to a minimum (we had a bit of both in the car and the bear definitely investigated them), and lock your car, even if you're in a spot where you're not worried about break-ins. The bear didn't seem threatening at all, but be safe!