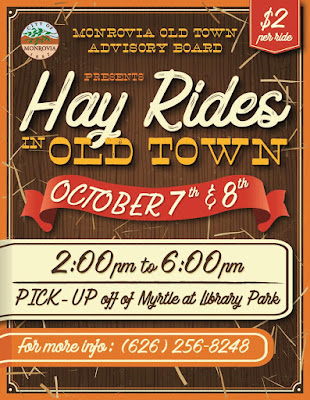 ~ Athens will be experimenting with a way of picking up trash that should hopefully foil garbage scavenging bears.  Currently, residents living north of Hillcrest Boulevard have their trash picked up in the afternoon, which means  trash cans being left outside for the better part of the day, giving bears more time to access them. So, for October, Athens will be picking up the trash for everyone living north of Foothill Boulevard first thing in the morning, targeting the time between 7 to 9 a.m. If it works it may be permanent. Questions: contact Alex Tachiki at 932-5553 or atachiki@ci.monrovia.ca.us.

~ Monrovia's fast-growing Taking Back Our Community coalition now has a website (https://goo.gl/2sL3YG) with a video. The coalition "is quickly growing to include many cities in our region, as the response to the initiative has been overwhelming and positive.  We currently have approximately 25 cities that have formally joined the group, with another 15 cities in various stages of joining our efforts." Basically, this is a coalition of ticked off cities that want Sacramento to change recent laws that they believe have contributed to a big jump in crime.

~ There will be  horse-drawn hayrides in Old Town in conjunction with the Annual Celebrate the Arts Show and Chalkfest on Saturday and Sunday, Oct. 7-8, in Library Park. Rides begin on Myrtle Avenue (east side of Library Park) from 2-6 p.m. Cost is $2 per person on a first-come, first-served basis, and is sponsored by the Monrovia Old Town Merchants.

~ LA County has completed synchronizing the traffic signals along Foothill Boulevard from the western edge of Pasadena to Shamrock Avenue in Monrovia. If you discover problems, let the city know.

~  A Taste of Old Town Monrovia is set for October 15, 5-8 p.m. The event showcases Old Town merchants and restaurants, and allows you to sample a variety of foods and beverages. Tickets here: https://goo.gl/qj9125

~ There will be a Community Meeting on Thursday, Oct. 5, at 7 p.m., at the Monrovia Community Center to discuss the current Monrovia Renewal construction west of Myrtle Avenue to the city limits and between Colorado and Hillcrest.