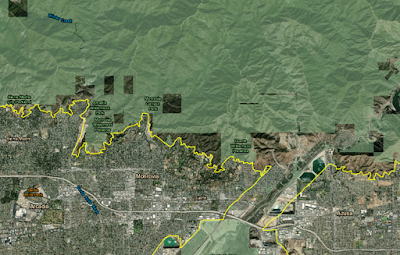 ~ California Senator Kamala Harris recently introduced the San Gabriel Mountains Foothills and Rivers Protection Act (https://goo.gl/zzX1an), which would create a National Recreation Area in the mountains above Monrovia. City staff, wanting to figure out how it might affect the city, made "repeated attempts to obtain a map of the NRA (including through direct contact with Senator Harris' staff) [which] have resulted in staff being told that 'there is no map' of the boundaries of the proposed NRA."

Ah, but there is.

Chi writes that, "we can confirm that there is indeed a map of the proposed NRA associated with Senator Harris' legislation, and that the proposed measure ... does not seem to impact non-Federally owned land, however, it does create an additional overlay of Federal bureaucracy over the entire NRA area (including portions of Monrovia), and it mandates that within 3-years after the passage of the law, the Secretary of the Interior prepare a comprehensive Management Plan."

~  A draft Fiscal Year 2017/18 Comprehensive Annual Financial Report by auditors Lance, Soll, & Lunghard indicates - Chi reports - that  "the City has received a clean fiscal audit once again this year!  In addition, of particular note, I am happy to report that overall, the City's General Fund is healthy and structurally balanced, as we ended Fiscal Year 2017/18 with an ending fund balance of $6.5M, which is a positive net increase of $267,000." However, he says, changes in accounting rules require the city to record retirement benefits differently, which means the city "shows a negative net position of around $3.3 million."