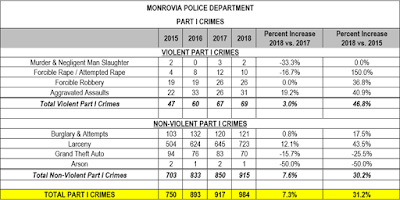 ~  Lime Bikes are going away, but will likely be replaced by other bikes. Chi said Lime is getting out of the bikeshare biz to focus on scooters. All its Monrovia bikes will be removed by March 15. The city is considering replacing Lime with a bike program Lyft is developing, or an e-bike program available through the San Gabriel Valley Council of Governments.

~ Monrovia crime is up. From 2017 to 2018 the city had a 7.3% increase in Part 1 (serious) crimes. He writes that "we saw an increase in both violent Part 1 crimes (3.0%) and non-violent Part 1 crimes (7.6%), and in addition, when we compare our 2018 crime numbers against calendar year 2015 (which is the year in which we recorded our historic low crime rate), Monrovia has seen a 31.2% increase in Part I crimes." He adds that there have been similar and greater increases in Part I crimes throughout LA County and in the State of California. He adds, "Law enforcement personnel have attributed these significant increases in criminal activity to the impact of State legislation that has been approved during the past few years, including AB 109, Proposition 47, and Proposition 57."

~  Schaefer Ambulance, which serves Monrovia under contract with LA County, is going out of business. Care Ambulance, which provides ambulance services for several communities surrounding Monrovia, will fill in on an interim basis.

~ Monrovia has been awarded $500,000 from the Southern California Association of Governments to evaluate ways to optimize the GoMonrovia public transit program. Ideas include:  An employer transportation subsidy program, which would use GoMonrovia, and hiring specialists to further analyze GoMonrovia  data.

~ Council Member Gloria Crudgington recently had cancer surgery, and "all 21 lymph nodes that were removed during her surgery came back as being 100% cancer free." This is a strong indication that the cancer had not spread. In other words, good news.