Some Parents Upset at Audition Process for the Musical Play, 'Annie' 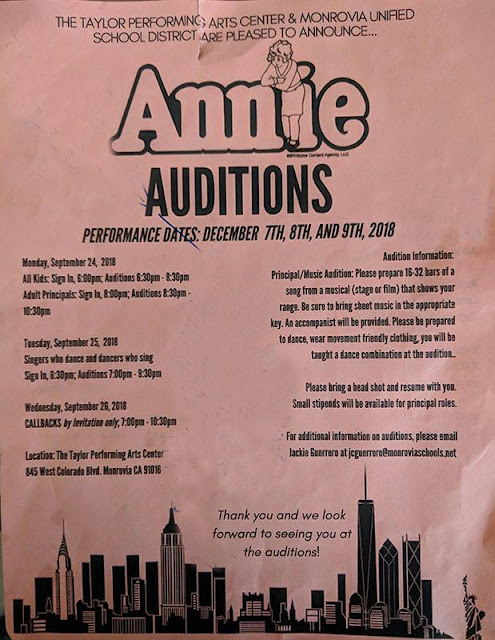 A number of parents whose children attempted to audition for the musical Annie are upset at what they feel was either an unfair or badly communicated message about the audition process.

Katie Datko posted on Facebook that her daughter was not given a chance to audition for the play, which will be held at the Taylor Performing Arts Center (aka Monrovia High auditorium), because she had prepared to sing rather than to dance. Other parents echoed similar concerns.

Some felt the flyer, above, which was passed out to students at school, was unclear.

School Board Member Ed Gilliland entered the discussion to answer a number of concerns. He wrote:

"The performing arts center is a part of MHS and first priority is MHS functions including drama productions. The Community Theatre is overseen by Patrick Garcia a School District employee who is tasked with providing opportunities for MUSD students to be involved in the arts at all grade levels. Neither the MHS productions or the community theatre “pay” to use the performing arts center, but the School Board does expect the community theatre to be self sufficient including the cost of a few professionals in several different capacities, thus allowing students and community members to work alongside  professionals. Outside groups such as Center Stage can rent the performing arts center for productions when it is available."