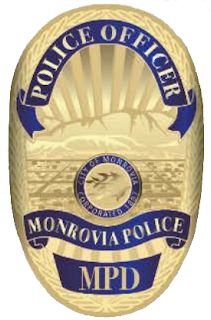 Petty Theft From a Vehicle
January 16 at 9:30 a.m., a petty theft was reported in the 800 block of W. Duarte. The victim called police to report items were stolen from their unlocked vehicle sometime during the night. The victim’s wallet and garage remote control were taken. Investigation continuing.

Vehicle Burglary
January 16 at 11:58 a.m., a vehicle burglary was reported in the 800 block of W. Foothill. There was video surveillance that showed a white Cadillac Escalade pulled up next to the victim’s parked vehicle and a passenger exited and smashed two of the vehicle windows. Two iPads were stolen from inside the vehicle. Investigation continuing.

Warrant / Violation of Restraining Order – Suspect Arrested
January 17 at 12:21 a.m., an officer was patrolling the area of Mayflower and Fano when he saw two subjects he recognized from prior contacts. A computer check revealed one of the subjects had two outstanding warrants. There was also a restraining order protecting the other subject from the subject with the warrants. The subject was arrested and taken into custody for the warrants and violating the restraining order.

Injury Traffic Collision
January 17 at 7:08 a.m., a caller reported an injury traffic collision near the intersection of Duarte and Myrtle. A motorist was stopped at the railroad tracks, facing south, and another motorist rear-ended the stopped vehicle. One of the drivers complained of pain and was treated at the scene by Monrovia Paramedics.

Grand Theft Auto / Pursuit – Suspect Arrested
January 17 at 8:44 a.m., an officer was patrolling the 1800 block of S. Myrtle, when he was notified of a stolen vehicle in the area. The officer located the vehicle traveling north on Myrtle and attempted to stop the vehicle, but the driver did not yield. A pursuit ensued until the vehicle went down a dead-end driveway and had to stop. A high-risk felony stop was conducted, and the solo occupant was arrested for grand theft auto and taken into custody.

Shoplifting – Suspect Arrested
January 18 at 2:52 p.m., an employee from a business in the 500 block of W. Huntington called to report a female subject had concealed merchandise in her purse and exited the store without purchasing the items. She was detained by loss prevention and the property was recovered. Officers arrived, conducted an investigation and the female was arrested for shoplifting.

Injury Traffic Collision
January 18 at 4:09 p.m., a motorist was traveling north on Peck, approaching Longden, and another vehicle was traveling west on Longden, approaching Peck. The motorist traveling north failed to stop at the stop sign and collided into the other motorist. One of the drivers complained of pain to his leg and was transported to a local hospital. The driver at fault was issued a citation for the traffic violation.

Drug Activity / Possession of Drug Paraphernalia – Suspect Cited
January 18 at 7:34 p.m., a resident in the 2600 block of California called to report a male and female subject that were possibly selling drugs from a parked vehicle. They reported people were approaching the vehicle and it appeared drug transactions were being made. Officers arrived and located the male and female. The female had syringes on her person and in her belongings. She also had other drug paraphernalia in her possession. The male didn't have any contraband. The female was issued a citation to appear in court on the charges.

Public Intoxication – Suspect Arrested
January 19 at 12:51 a.m., an officer was patrolling the area of Lime and Myrtle when he saw a male subject lying on the sidewalk. The officers checked the subject’s well-being and discovered he was too intoxicated to care for his own safety. He was arrested for public intoxication and held for a sobering period.

Providing False Information to a Police Officer / Warrants – Suspect Arrested
January 20 at 7:56 a.m., an officer was patrolling the area of Mountain and Lime when she saw a motorist commit a traffic violation. The officer stopped the motorist for the traffic violation. The driver did not have any form of identification and there was no DMV record of him having a driver’s license. He was arrested and taken into custody in order to obtain his identify. He was eventually identified by his fingerprints. It was then discovered he had provided false information to the officer and had four outstanding warrants for his arrest.

Commercial Burglary
January 21 at 1:58 a.m., officers responded to a business in the 500 block of S. Myrtle on an alarm activation and found the front window to the business was shattered. An interior check was conducted, but no one was found inside. A review of the video surveillance showed two suspects wearing dark clothing and hoodies shattered the front window to gain entry. One suspect entered the store, while the second suspect waited outside as a lookout. The suspect took gold jewelry and diamond rings from the display cases. The suspects were inside the store for 60 seconds. Investigation continuing.

Grand Theft Auto
January 22 at 6:51 a.m., a vehicle was reported stolen from the 900 block of S. Fifth. The victim reported his vehicle was parked in a hotel parking lot and sometime during the night, his vehicle was taken. The vehicle was entered into the computer system as stolen and the investigation is continuing.

Shoplifting – Suspect Arrested
January 22 at 8:21 a.m., an employee from a business in the 1600 block of S. Mountain called to report a male subject entered the business, concealed items on his person and exited the store without paying for the items. He was detained by employees and was cooperative. An officer arrived and conducted an investigation. The suspect was issued a citation to appear in court on the charges. The items were recovered and returned to the store.

Grand Theft Auto – Suspects Arrested
January 22 at 5:57 p.m., an officer was patrolling the 1800 block of S. Myrtle when he received a stolen vehicle alert from his vehicle’s monitoring device. The officer stopped the vehicle and performed a felony high-risk stop. A female passenger exited the vehicle and ran. The vehicle then sped off, attempting to evade officers and crashed into a building in the 200 block of W. Foothill. At that time, the male driver exited the vehicle and fled on foot. The Foothill Air Support Team helicopter assisted and was able to locate the suspect. Officers set up a perimeter, and both the driver and passenger were located and taken into custody. The suspects were arrested for grand theft auto, felony evading, and felony hit and run.