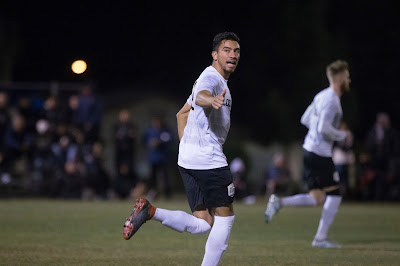 Antonio Rosas grew up playing soccer in Monrovia, where he earned accolades for his performances on the pitch.

Now, he is a member of the starting team for a Cal State LA Golden Eagles squad that will be making the program's first appearance in an NCAA Division II championship match since 1981 on Saturday at noon (PST) at Highmark Stadium in Pittsburgh. He will conclude his college career on the grandest stage possible after a steady climb to the top.

Rosas was named the Rio Hondo League Most Valuable Player as a senior at Monrovia High School. He is now a senior defender for the Golden Eagles and a key reason for the program's success.

For Rosas, the road to the NCAA championship has not been easy.

He wasn't even certain that he would play collegiate soccer after enrolling as a student at Cal State LA in 2014. He said he initially planned on sticking solely to his academic pursuits, but he got the itch to play competitive soccer and he joined the Golden Eagles' soccer program in 2015, following a tryout.

"We knew he was raw, but he was extremely coachable," head coach Chris Chamides said. "We saw potential in him; what impressed us all was how hard he worked. He's learned the game and stays very simple. He's a rock for us and has become very strong both mentally and physically."

Rosas got his first game action in 2016 and has been a huge part of the Golden Eagles' defense ever since. He will be appearing in his 75th game on Saturday. As a freshman, he appeared in 14 games with 11 starts. He has started 60 games over the past three seasons. He has been a big part of a defense that has posted 15 shutouts this season and is second in the nation in goals against average.

He earned third-team All-West Region honors in each of the past two seasons and picked up second-team All-CCAA honors in 2018 and All-CCAA honorable mention in 2019.He has scored four goals in his Golden Eagle career with two assists and a total of 10 points.

Rosas said his introduction to college soccer was eye-opening.

"It was very professional and I really felt I needed to do a lot of work," Rosas said. "I saw everyone else around me and realized I had to get a lot better."

Rosas earned his bachelor's degree in business administration and is pursuing his master's degree.

Together, Rosas and his teammates of the last four years have been a part of 58 victories for Cal State LA with one Super Region championship, one CCAA regular-season championship and two CCAA Tournament titles.

He would love nothing more than one more victory together and an even bigger championship on Saturday.