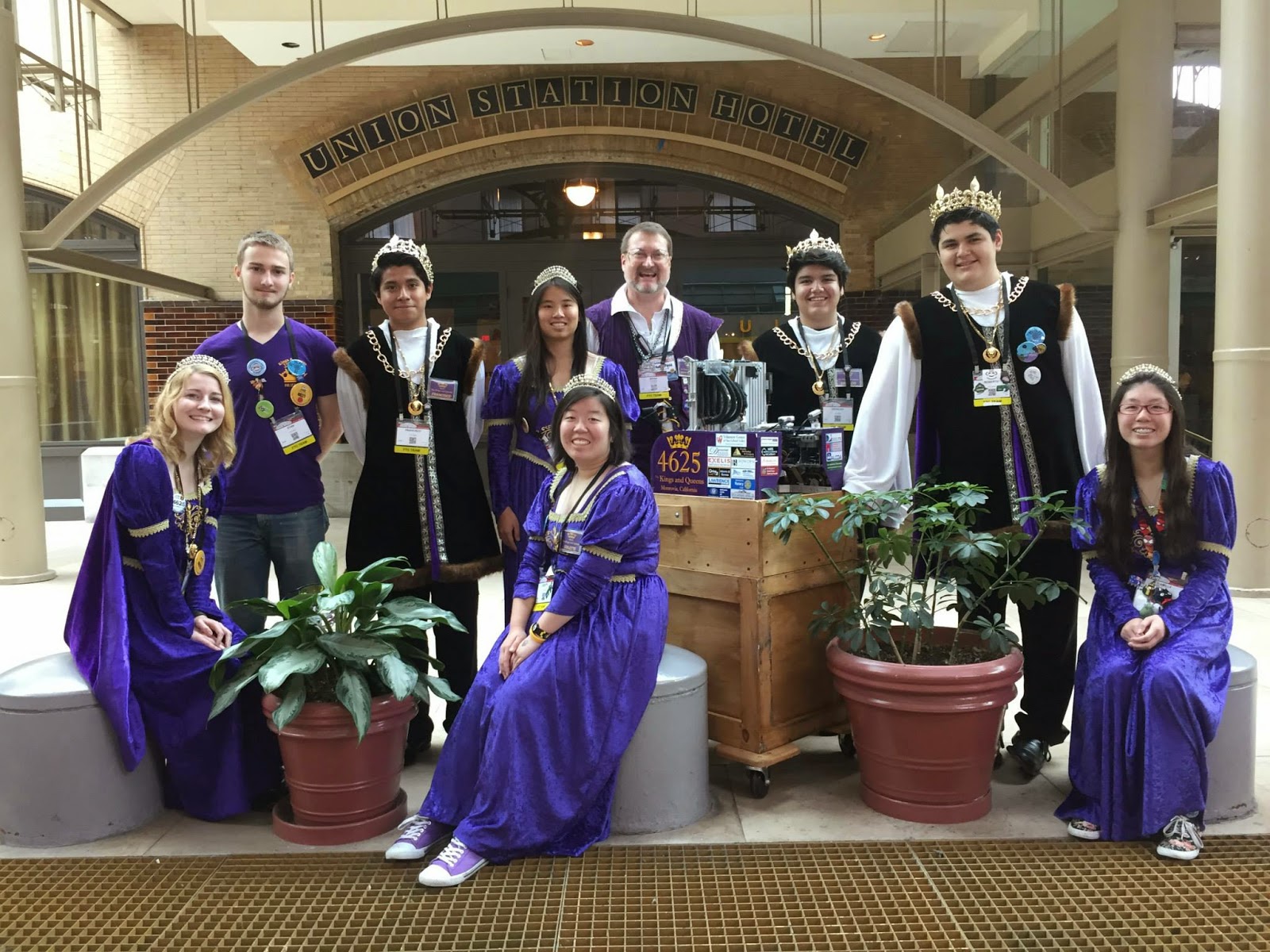 Monrovia High School's robotics team The Kings and Queens returned Monday from St. Louis where they spent the past week competing in the FIRST Tech Challenge Robotics World Championship.  The team posted a respectable Championship record of four wins and five losses to finish the season ranked 86th out of 4,410 FIRST Tech Challenge teams around the world.  This was an improvement over The Kings and Queens record of the prior season which saw them earn three wins and six losses for a final ranking of 101.  The team's robot "Sir Lancelot" performed well, making it through the grueling two days of qualifying matches without a single mechanical failure.

Team captain Melissa Johnson commented, "Last season at Worlds we had a lot of mechanical problems with our robot.  So this season one of our primary goals was a create a new robot that would be strong and well-designed so parts wouldn't break and fasteners wouldn't come lose.  The World Championship is an endurance contest and your robot has to hold up or you're quickly out of the running.  We met that goal and then some.  We didn't have to do any repairs or replace any parts during the entire tournament."  Two other teams from Southern California were on track to be tournament finalists before major mechanical failures saw them eliminated from contention.

The Kings and Queens are proud of their season but they know they have more to learn if they want to be one of the top robotic teams next year.  As team member Roberto Orozco noted, "The teams that make it to the World Championship after a season of elimination tournaments are very good and have excellent robots.  We've shown that we can design and build a world-class robot and that the rest of our team program is good enough to get us to Worlds two years in a row.  Now we have to concentrate on doing the game tasks faster and making everything better without losing any of the ground we have gained. That's how we will become a World Championship finalist."

The Kings and Queens will be losing all four of their veteran team members from last year's team to graduation in June.  That will leave the members new to the team this year with some big shoes to fill.  Amanda Sullivan, the team's only four-year member, commented, "We've tried hard this year to pass as much of our knowledge and experience on to the new members as we could but it is hard for them to understand without having been through the experiences that those of us have been through that have been doing this for years.  Going to Worlds was an important part of the learning process.  Now they have seen top-level robots in action, talked to kids on top-level teams, and experienced both the pressure and excitement that comes with competing against the best of the best. They can come back next season with a better understanding of what it means to be a top robotics team and what it takes to get there.  I guess that is the legacy the Seniors will leave behind."

Source: Brian Johnson with the Kings and Queens