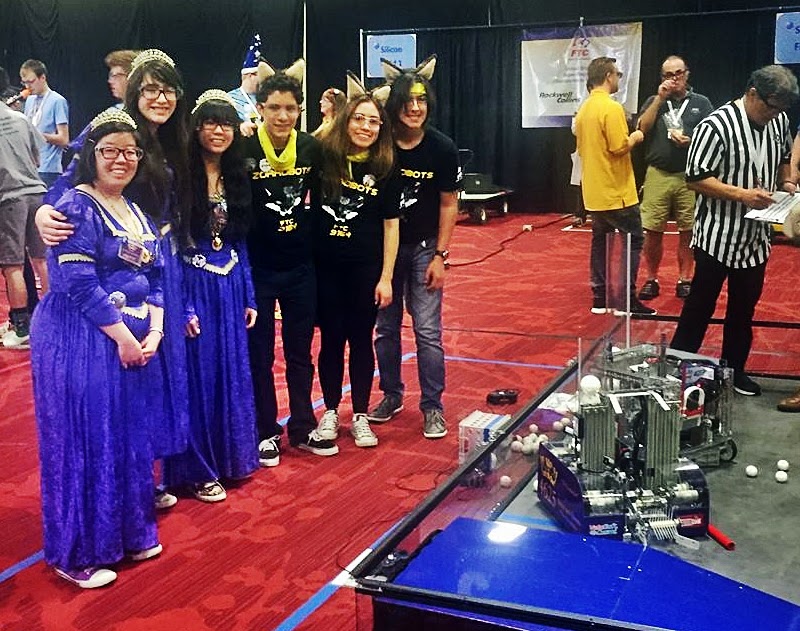 Kings and Queens and their robot, Sir Lancelot.

The ten Monrovia High School students of the "Kings and Queens" robotics team and their purple robot "Sir Lancelot" qualified to advance to the 2015 FIRST Tech Challenge Robotics World Championships for a second year in a row as a result of their excellent performance at the West Super-Regional Robotics Tournament held in Oakland this past weekend.  The three-day tournament brought together the 72 top teams who were winners of state and regional competitions from 13 western states.  The Monrovia team is one of four qualifiers from the Los Angeles area who will be among the 128 top teams from around the world to compete at the World Championships which will be held at the historic Union Station in St. Louis April 22-25.  Only 35 U.S. teams who competed in last year's World Championship have earned the right to come back again this year.

The Kings and Queens team, four seniors, one sophomore and five freshmen, designed and built their own 18 by 18 inch robot from t-slot channel, Plexiglas, and formed aluminum to compete in the annual FIRST Tech Challenge (FTC) robotics competition. The Kings and Queens are well known in the FTC community for their driving skill, unique robot designs, their signature costumes of purple velvet gold-embroidered renaissance dresses and gold tiaras for the girls and fur-trimmed black velvet jerkins with purple capes and gold crowns for the boys, and their supporter's cheer of Huzzah! every time they score points.