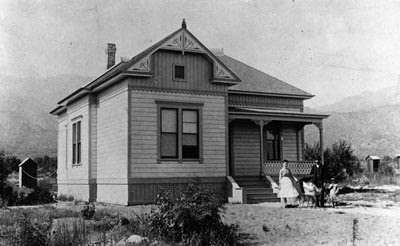 The Anderson House in about 1888. George H. Anderson lived here for 87 years. The home originally belonged to his parents, John and Lizzie Anderson (shown above with George in carriage and brother Lewis). John built the home and other buildings in Monrovia and was active in the business life of Monrovia, serving on the City Council in the early days. (Security Pacific Bank Collection, LA Public Library)

The Monrovia Historical Society has been revitalized. The Society was originally formed in 1979 – with a gift from the California Community Foundation - to care for the Anderson House as a museum open to visitors and fully furnished to the smallest detail to show family life in the 1880s. 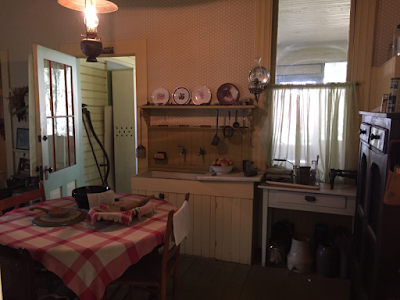 Unfortunately the Historical Society was dormant for nearly 15 years and the Anderson House was closed to the public.  As membership declined and founding members passed away, there were fewer volunteers to keep the museum open and fewer funds to keep it in good repair. In recent years, even visits by Monrovia schools’ third graders had to be curtailed as class sizes increased and the building itself become at risk. Now that’s changing.

But the Historical Society has a mission all its own. Today, it has two roles.  It is raising funds to restore the Anderson House (first-phase repairs are underway), and recruiting volunteer docents to once again open it to the public.  Its second role is to serve as the non-profit home of the new Monrovia Legacy Project.  The Legacy Project is preserving the collections and knowledge of City Historian Steve Baker and his predecessor - digitizing them and old photos and stories from the public, to make them accessible to the public through the Monrovia Public Library.

The Legacy Project was the spark that brought the Historical Society back to life.  Former Society Board members came back - Joe Garcia, Kathy Mueller, Todd Weber, Scott Thomas and Steve Baker - and they were joined by new board members Sandy Burud and Louise Robertson (Co-Project Directors of the Legacy Project) to form a current board.  There is a membership campaign to enlist Society members.  You can find out how to join http://goo.gl/B4vO5v

1) May 1 Tour of the Anderson House.  For the annual tour of historic homes by MOHPG, the Anderson will be one of the homes on the tour. Tickets and information here: http://goo.gl/ZoqfQj

2. Narrated Driving Tours.  A series of driving tours through Historic Monrovia, narrated live by Steve Baker on a small Monrovia Transit Van.  For those who have done Steve’s cemetery tour, this is akin to that, but even richer.  As you ride in an air-conditioned van you will hear in story form tales of the events and characters who shaped out city.  The tours are:
Tour 1 Northwest Monrovia
June 18 —1 p.m. or 3:30 p.m.
Tour 2 Northeast Monrovia
July 17 —11 a.m. or 2 p.m.
Tour 3 Southeast Monrovia
August 13 —1 p.m. or 3:30 p.m.
Tour 4 Southwest Monrovia
October 16 —11 a.m. or 2 p.m.

Tickets can be purchased at the Community Center -- $50 per person -- proceeds to the Historical Society. Or contact Louise Robertson @  305-3025. Sign up early as each tour can only take 20 people.

Your participation in these events and your passing the word will help the Historical Society become vibrant once again.    And certainly, gifts (of money, time, or materials) to support the Legacy Project and/or the Anderson House restoration would help enormously.