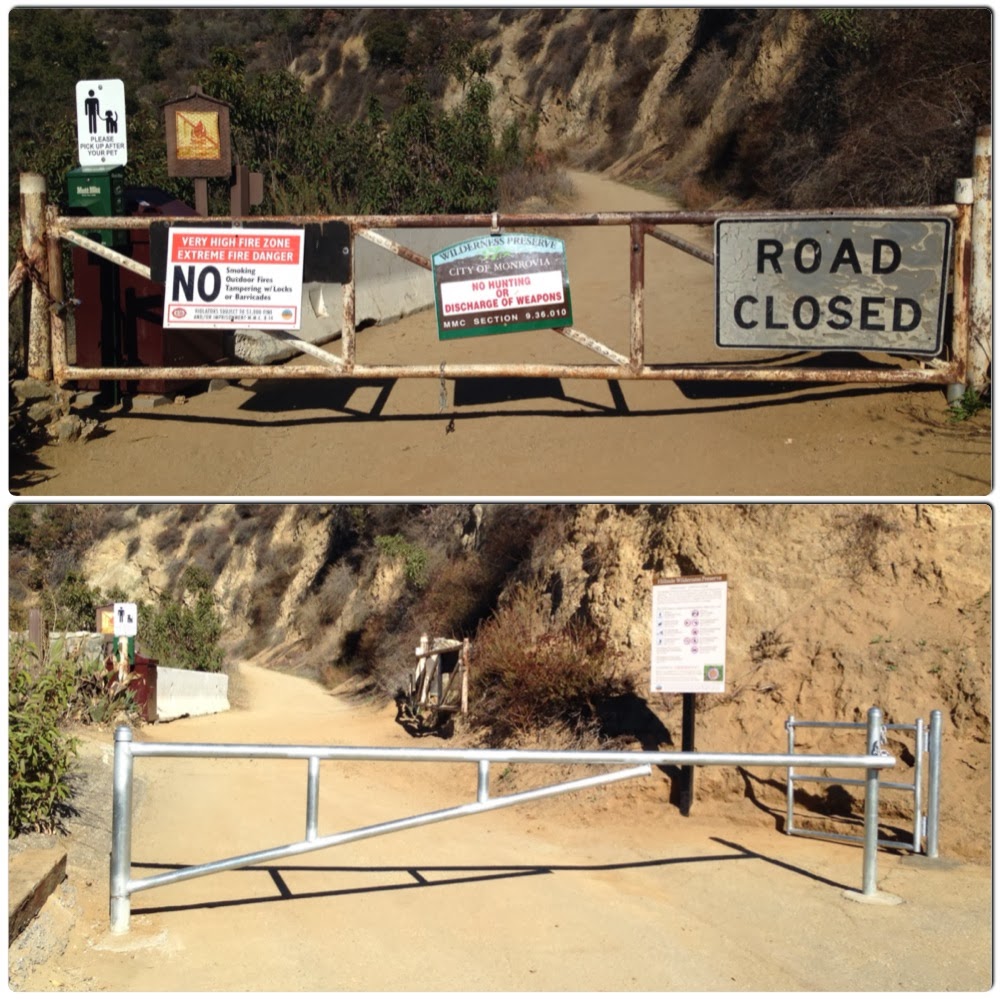 The old and new gates at Clamshell Trail. Finally some progress.

They say that when you criticize someone, you should say nice things about them first, so, since I am about to slam the Monrovia city government, let me say some nice things first.

We have an amazing Old Town; that the city was able to fit an awesome theater into Old Town while actually enhancing Old Town's character is a triumph. Having lived through a serious earthquake and an insane windstorm, I've been very impressed with the city's handling of disaster response. The events the city helps coordinate, such as the Christmas parade and tree lighting, the amazing Fourth of July fireworks display, the Friday-night Farmers Market, and now a New Year's Eve party, all seem to to be very well done. The city's attitude toward business seems far more positive than other cities I know, some of which seem to regard businesses as pariahs. And, as best I can tell, the city has responded to the fiscal challenges facing California cities by pretty much getting its expenditures under control, even when it has hurt. Good things.

Now for the criticism.

Somewhere around 14 years ago residents on the upper edge of Monrovia were concerned about a plan to build homes in the foothills above their homes, so the city responded by passing a bond and getting money from the state to purchase the land as a preserve that people could hike about in.

But then, for well over a decade, the trails didn't open. So, the day after Christmas last year, thinking that more than enough time had elapsed, I sent a letter to all the city council members and the city manager saying I was about to write this article. Here, verbatim, are the points I made:


- It is somewhere around 14 years now since Monrovia passed a bond measure to purchase the hillside property and nothing has been done to provide the access that was promised to the voters who passed the bond measure, or to the State of California, from which the city obtained money on the condition that the city would provide access to the area.

- The people of Monrovia have been taxed to pay for this bond for well over a decade, but the service they were promised when they voted on the measure has not been provided.

- I am aware that there were, and are, lawsuits hindering the opening of the trails, but my impression is that solving these suits is a low priority. I do not get the impression that the city is exerting much effort in this regard, despite "opening of the hillside area" scoring rather high in the recent community survey.

- The main reason for that impression is that whenever I ask about progress, my council-member contact needs to check for me. If it was a matter of discussion and regular updates among the leadership of the city, it seems unlikely such checking would be necessary.

- Further, communications with the public regarding the lawsuits and progress on opening the trails is extremely poor. What little communication has occurred seems to be mostly in response to my questioning. Also, the previous city web site had a page that gave some rudimentary information about progress, but after being first posted it did not seem to be further maintained, and I can no longer even find that limited information on the new city website.

- Whenever I have asked - and I have asked five or six times over the last few years - I have always been given vague estimates in the range of a three to six months regarding when the trails will open - but those estimates never seem to come about.

- The one trail I was told was "sort of" open is on Norumbega. I explored it and it's not a trail at all. It looks like an overgrown driveway leading about 100 yards up to a graded lot that was never built on.

- If a private company in Monrovia were to sign people up and bill them regularly for a service that the company did not provide within a reasonable time, I suspect the Monrovia City Council would rightly be furious. And if the company said that lawsuits were preventing it from providing the service, I doubt you would be appeased. I suspect you would at minimum demand regular updates, progress reports, and that you would say that their being sued did not give them the right to continue charging people for a service the company was not providing. I really don't see any substantial difference between such a company and what is happening with the city.


I received responses to this letter from Mayor Mary Ann Lutz - who invited me to meet with herself and Interim City Manager Fran Delach - and from every council member except Alexander Blackburn.

Here is some of the feedback:

Councilman Tom Adams: "I couldn't agree more. I have complained for years about this and it seems to be the normal governmental red tape. In my opinion, it has been open from the beginning. I know plenty of folks who go there and no one stops them. Perhaps a part of your article would be to explain to people how to get there?"

Fair enough, here's how to get there: A map of all the trailheads and their status ( http://goo.gl/PNzQYT ) and an article: http://goo.gl/azcBtq

Larry Spicer: "I understand your frustration about the wilderness plan. All I can say is once the holidays are over this issue will be taken to City Manager so we can move forward with some type of timeline that can be followed. I know you have heard this before but I will do my best to help move this forward along with my colleagues, My wife and I also cast a vote for the purchase and would like to have access to my investment!"

Becky Shevlin: "I know that you are tired of hearing the same responses; I can definitely understand your frustration; I think many of us are frustrated with the pace of the progress or lack thereof."

In another email, Shevlin told me the trailhead on Ridgeside Drive had been opened. I went to check on Jan. 1 and found a trail sign and a "Mutt Mitts" dispenser (for plastic bags to pick up after your dog) had been installed, but there was still a locked gate with a "Road Closed" sign. I was unimpressed, but a few days later she said she had just been there and insisted it was open, so on Jan. 6 I checked again. This time I found a new gate, combining a vehicle gate and pedestrian gate, had been installed. Hooray!

This leaves two other trails to be dealt with. Or three, if you consider Sleepy Hollow (off of Norumbega) to be a trail, though I consider it a bad joke, basically a short, unpaved driveway.

The other trails start at the top of Highland Place and at the end of Cloverleaf Drive.

In my meeting with officials...

Mayor Lutz said, "Your frustration is mirrored by all of us, but we have to go through protocols." However, she said, "In the last two months things have suddenly taken off," and "we're making great strides." She attributed the delays to multiple lawsuits and the attendant difficulties in finding old property records regarding right-of-way on Cloverleaf. These legal problems had to be handled one at a time rather than in parallel, she said, because the city didn't have enough money. She said that in the last few months the city has hired a new attorney to work on the right-of-way issue.

Interim City Manager Fran Delach said he believes "the delays are behind us."

Acting Recreation Division Manager, Community Services, Kerri Zessau, said two properties on Cloverleaf are now being appraised, which could take a couple months, then offers will be made to the property owners. Using eminent domain (the right of a government to force the sale of a property for a public use) "is not even a topic of discussion." (Lutz added that the city wants to try all other approaches first.)


In conclusion, all Monrovians - from the richest to the poorest - have been paying regularly for roughly 14 years for a service they are not getting. They've been paying either directly, as property owners, or indirectly as renters. Yes, there are the legal issues, but Monrovia was one of the leaders in redevelopment, which included lots of property issues, including lawsuits, and these issues were handled much more expeditiously than this Hillsides debacle.

So, I believe the City Council should ...

- Insist that its staff provide a progress report at every city council meeting on progress getting the Cloverleaf trail open.

- Work to establish an opening date for the Highland Place trail. I understand it is closed because of the forest fire damage, but at some point the trail should be open-able. This ought to be on the City Council agenda every few months or so to review.

- Post information about the Hillside trails on the city website, just as it does for Canyon Park: http://goo.gl/kiO5Li