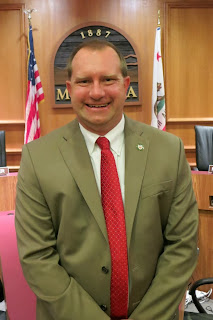 After a lengthy recruitment process, the City of Monrovia has hired a new Public Works Director: Carl E. Hassel, P.E.  Mr. Hassel has over 22 years of experience in civil engineering and public works and has spent the last six years as the Assistant Director of Public Works and City Engineer in the City of Azusa.

Hassel's career focus has been on service to the community and building projects.  His expertise lies in major and complicated economic development projects and the facilities work that goes along with them.  He also is an expert in dealing with the Metro Gold Line Foothill Construction Authority, having successfully competed for a $5 million Metro grant for Azusa to improve the overall traffic signals and transportation systems, and managing Gold Line improvements similar to the construction underway in Monrovia.

Hassel has also developed and managed long-range capital improvement projects as well as street management plans.  During his time in the City of Azusa he managed and coordinated multiple paving projects in the City using environmentally friendly technologies for road reconstruction projects, and developed and oversaw the Azusa Sewer Master Plan, completing a 10-year Sewer Capital improvement program in one year; using trenchless technology.

Prior to his work in the City of Azusa, he has 16 years' experience working as a private consultant for firms in Southern California.  Mr. Hassel is a Registered Professional Civil Engineer in the State of California.  He received a Bachelor's of Science in Civil Engineering from California State Polytechnic University, Pomona, in 1991 and is currently pursuing a Masters in Public Administration (MPA) from the University of La Verne.  He is a member of the American Public Works Association and is the past-chair for the Technical Advisory Committee for the San Gabriel Valley Council of Governments.

Hassel was born in Arcadia, CA, he now lives in the City of Glendora with his wife of 22 years and his three children.