Monrovian Collects 1,009 Christmas Gifts for Children Around the World 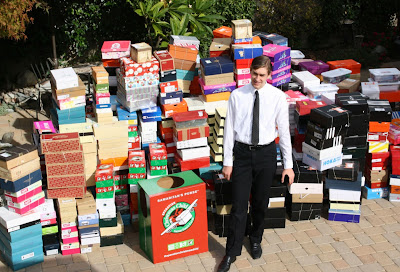 Sixteen year old Monrovian, Grayson Wade, has been supporting Samaritan's Purse Operation Christmas Child for seven years since being introduced to it as a Cub Scout.  Monday he delivered 1,009 shoebox gifts to the relay center in Arcadia.  From there the shoeboxes are transferred to a collection center in Orange County.  Once processed, they will ship all over the world to children in need.

Grayson's shoeboxes contain school supplies, hygiene items, toys, puzzles, art supplies, games, stuffed animals, musical instruments, clothing, etc.  In addition to the items he places in the shoeboxes, he includes $7 per box for shipping costs, so he needed to raise a substantial amount of money.  Grayson launched an aggressive door to door campaign to raise money for the boxes he packed at home.  Monrovians not only donated money, but also items for sewing kits, toys, stuffed animals, games, as well as packed shoeboxes.  He appealed to Monrovia Rotary Club and Monrovia Kiwanis Club.  Local stores, A Snail's Pace, Payless and Marshall's, saved empty shoeboxes for Grayson.  Also supporting his efforts were kids from scout troops and student clubs from several local high schools, including his own, Bosco Tech.