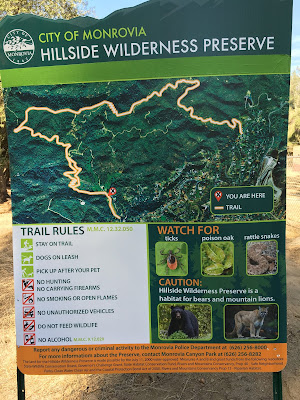 I got a preview tour today with City Manager Oliver Chi and Director of Public Services Tina Cherry of the new trails in the Hillside Wilderness Area - to be officially opened on Nov. 19 - though it is now in what City Manager Oliver Chi called a "soft opening," meaning you can get in and hike or bike in the area, but it's not quite polished - a bit of trail work to be done and a fair number of signs to be posted.

Anyway, here are some observations:

- The entrance at Cloverleaf is no longer the road. Cloverleaf Drive is now gated at the point where I indicate in red. Instead, the entry point is where the green line touches the road, just about ten yards south of the gate. Also, don't confuse the green line (which is new) with the red line just a few feet away, which is a private road. (The blue spot, by the way, is an underground reservoir - you won't see any water.) After following the green trail you will encounter another gate, with a pedestrian door that you can get through during normal park hours.

- The new trail is the preferred route as it does not cross any private property, and that's the route the city would like you to take. However, the old route will remain open. 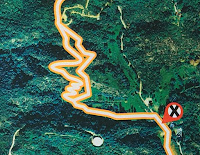 - Oops. Maybe I should have said the new trails, because just above the Cloverleaf entrance the trail splits into two, the one on the left which is very steep, with switchbacks along the trail, and the other which is relatively easier.

- When I say "relatively easier," it is because all of the new trail is quite steep. The old road is easy - you could drive it with your car. It is a casual walk. But to check out the new trail we took a Polaris Ranger, kind of a motorized mountain goat. Also, it is not just steep, but also it is steep with a lot of ups and downs, so even if you're generally hiking downhill, you'll still be hiking uphill quite a bit. But I guess half the point of going up there is to get your exercise, and you will.

- It is a bit longer. Cherry guesstimated the new trail (from Cloverleaf to Ridgeside) is about a mile longer than if you follow the old road.  About three total. The trail juts west toward Arcadia, with a great overview. Also, you can continue on over to Arcadia's Wilderness Park. At the turnoff to Wilderness Park, Cherry said the city will post a sign with the Wilderness Park hours since you wouldn't want to get over there and find you can't get through. 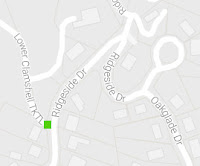 - If you want to take the new trail, my recommendation would be to take Clamshell road starting at the Ridgeside entry point, marked with the green dot. (Drive up Canyon to get to Ridgeside or Oakglade, which loops around into Ridgeside. The trail entry point looks like a driveway.) Hike or bike to the top of Clamshell, where there is a sign that directs you off the road and along a trail. Take the trail until you get to a cutoff trail to the right (if you get to a lookout you've gone a bit far). Take the cutoff down the steep switchbacks. At the bottom is the old road to the left and the new road to the right. Take the new road and have fun. Good Lord willing, you'll end up at Cloverleaf. Hiking boots recommended. If you're riding a bike, make sure your brakes are properly adjusted and brake cables are not frayed. Oh, bring water, too. There ain't any up there.