The Origin of Monrovia's Box Clock 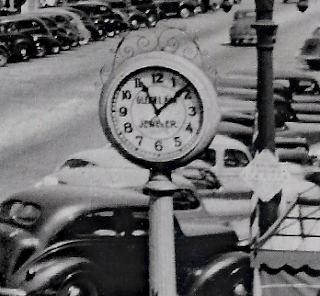 The latest issue of the Monrovia Historic Preservation Group's newsletter examines the origin of the Box Jewelry Store clock on Myrtle.

"Originally, the clock was located on the west side of the street where Glenn L. Box had a jewelry store (he arrived in Monrovia in 1921). In 1931 he moved his business (and, it is assumed, the clock) to 518 S. Myrtle."

The clock was made by the Brown Clock Company, and Monrovia’s clock is one of only four Brown clocks still remaining in California.

Over the years the dial has been changed and the iron scroll work that you see at the top of the clock in this picture has been replaced with neon lettering.