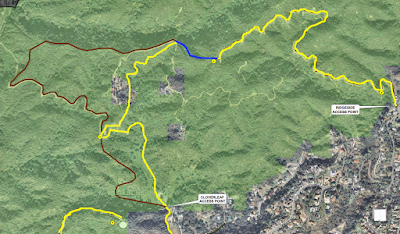 Red shows the proposed trail. Blue shows a steep portion of the trail with sharp switchbacks which will be improved. Yellow shows the existing trail. In an interview Chi said the yellow trail would not be shut off to hikers and bicyclists, but they would be encouraged to follow the new red path.

City Manager Oliver Chi reports that the opening of the Cloverleaf entry point to the Hillside Wilderness Preserve will be delayed from four to six weeks, bringing the opening date to late October of this year. At the council's April 5 meeting, at which the city purchased rights of way to obtain access to the preserve, Chi said it could take up to six months to open the gate.

At this Tuesday's meeting ( https://goo.gl/wqksZB ) the City Council will consider a proposal by residents who live in the Wilderness Preserve to delay the opening of the gate until trail improvements can be made so some of the trail traffic could be diverted around the residents homes. In an interview, Chi said city staff is agreeable to the delay in part to minimize the risk of legal complications.

The staff report ( https://goo.gl/lq1wI8 ) says: "[I]t has been estimated that the trail system improvements can be completed in 4-6 weeks following the award of a contract. This would mean that the opening of both the Cloverleaf Access Point and the Ridgeside Access Point would occur towards the end of October 2016."

City staff is proposing hiring Pokrajac Corporation for $194,235 to finish the trail work. The required funding is available in the restricted Hillside Wilderness Preserve Fund.