The California State Assembly today complied with a court order and released financial data for its members that it tried to keep hidden. The lawsuit which caused the information to be release was prompted by a fight between Assemblyman Anthony Portantino, who represents part of Monrovia, and Assembly Speaker John Pérez. http://goo.gl/7myVK
- Brad Haugaard 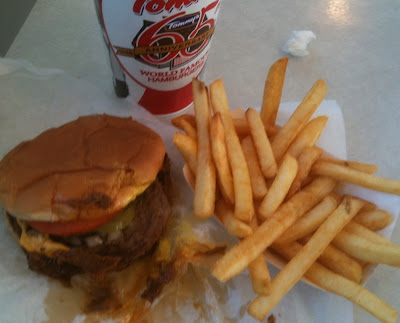 Lunch at Tommy's, at the corner of Huntington and Mountain. Simple menu. Burgers and dogs with chili. Nice place for a change when you are not in a health food mood. I had a chili cheeseburger with fries. Yummy and greasy.

Xencor, Inc., of Monrovia, has received "a broad patent covering optimized monoclonal antibody variants and their application for extending in vivo half-life of antibodies." Opinion: I suppose those who need to know understand what that means, but I think it means Xencor has figured out a way to keep antibodies alive and working in people's bodies for longer. http://goo.gl/vueIE
- Brad Haugaard

“The Governor’s plan is a good first step but relies far too much on a $7 billion tax hike that voters are likely to reject. More: http://goo.gl/RMrBA 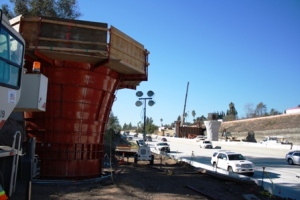 The I-210 Bridge two main column structures in the center median are complete and the “form” was moved early yesterday morning to the southern shoulder and is now installed around the third. The abutments are also well underway, and crews are getting ready to turn their attention to the super-structure.

In the coming weeks, installation of the falsework will begin. This activity will take a number of weeks to complete, and will require up to 20 late-night closures of all eastbound lanes of the I-210 Freeway. Some closures will occur on consecutive nights, and all will take place starting at Midnight with lanes reopening by 5 a.m.

This week, the Fire Department had a special visitor who turned out to be a true Christmas miracle. On Saturday, December 10, a 911 call for a baby not breathing was dispatched. Upon arrival, the crew found two-year Thierry Espinoza in full cardiac arrest. Fast action and advanced life support from Firefighter/Paramedic Harvey Hewitt and Anthony Gallegos, along with Captain Brad Dover, Engineer Andrew McDaniel and Firefighter Randy Towns was initiated, including insertion of a special medical device into the shin bone for medicine administration, insertion of a tube for breathing, heart defibrillation and CPR.

Baby Thierry was transported to Arcadia Methodist Hospital in critical condition and was later transferred by ambulance to Children's Hospital Los Angeles, where he underwent therapeutic hypothermic treatment (lowering the core body temperature) and advanced medical care. After 8 days in the Intensive Care Unit and another two weeks in a cardiac monitoring unit, Baby Thierry was released from the hospital.

On Wednesday, Baby Thierry, his older brother William and Mom Karin along with his buddy, Diego and Diego's Mom, paid a visit to the fire station to say thank you. All of the on-duty crew were extremely happy to visit with Thierry and spent time visiting, playing, and showing the boys around the station. They also spent time talking with Mrs. Espinoza and sharing in the joy of his survival. This was a unique and special visit, as the crews knew that Thierry's condition was critical and didn't know the outcome of his treatment and care. Certainly this was an incredible story with a very happy ending and a true Christmas miracle.

Thanks to the tremendous efforts of the Monrovia Firefighters on scene, the care of nurse's and Doctor's as well as Thierry's strength to survive, the Espinoza family had a special Christmas this year.

In his weekly report Monrovia Interim City Manager Mark Alvarado said ...
~ The New Year's Eve event was "quite a success." He said the city is "evaluating this year's event in preparation for next year's celebration." Opinion: I attended and enjoyed it. Great for adults who drink beer and wine, but we should add something for teens or non-drinking adults (our teens got bored and left for Old Pasadena). How about a booth (with seating) that serves cocoa, coffee, hot cider and sodas.

~ The state Supreme Court's ruling essentially eliminating redevelopment agencies in California "really is a sad day," but, it does not appear that the state intended to eliminate redevelopment, but rather raise money to fix the state budget. So, he said, "there is discussion (within the legislature) about how to bring back redevelopment in some fashion."

~ There will be a Buick commercial filmed in Old Town this Saturday, Jan. 7, from 7 a.m. to 5 p.m. "The commercial will involve music tour buses following a picture car. The main location is Jenni B's dress shop at 106 E. Lime Avenue. Please note that Lime Avenue, from Myrtle Avenue to east of the Police parking lot will be closed during the filming hours."

~ Gifts donated to the Fire Department's Spark of Love Toy Drive not only stuffed a fire engine, but raised $2,332 in cash for additional toys, up 20% from last year.

During the last seven-day period, December 27 through January 3, 2011, the Police Department handled 508 service events, resulting in 100 investigations. Following are the highlighted issues and events for the weekdays listed above.

On January 2 at 7:16 p.m., an officer was dispatched to the 300 block of West Olive regarding a stolen vehicle. The vehicle is a white, 2002 Toyota Camry. The suspect was described as a male Hispanic, 5'10", medium build, wearing dark clothing. The vehicle’s engine was left running while the victim made a delivery. The vehicle was last seen southbound Magnolia from Olive. Investigation continuing.

On January 3 at 3:57 p.m., a business in the 1400 block of South Mountain called to report one of their service vehicles was taken between December 31 and January 1. The vehicle is a white, 2006 Toyota Corolla. It was last seen parked on their lot. When they returned to work after the New Year holiday they discovered it was missing. They did not report the vehicle stolen right away because they thought one of the service technicians may have left it at a different location. When the vehicle did not turn up, they called police. Investigation continuing.

On January 3 at 7:03 p.m., police responded to the report of domestic violence at a residence in the 100 block of East Pomona. A husband and wife were arguing, when the wife held up a barbecue fork in a threatening manner. The husband taunted his wife to stab him and she did. She stabbed him in his left forearm. She fled the scene prior to the arrival of officers. The officer later spoke to her on the telephone and she agreed to come to the station, where she was arrested without further incident.

On January 4 at 6:21 p.m., police received a call reporting a hydroponic marijuana cultivation at a residence in the 700 block of West Walnut. The property owner was told by a neighbor that the upstairs unit had a water leak. The owner responded, but no one was home. He went inside and found all of the rooms full of marijuana plants. The water leak was caused by the irrigation system for the plants. When officers arrived, they found the wiring for the system was creating an electrical hazard. An employee from the Edison Company was summoned, who rendered the location safe. Approximately 250 plants were seized, along with expensive hydroponic equipment. Investigation continuing.

~ Assemblyman Tim Donnelly, who represents part of Monrovia, was cited at Ontario Airport for having a pistol in his carry-on luggage. He said he forgot it was there.  http://goo.gl/BDwD6

Representatives from Monrovia businesses will be available at the Monrovia Library this Saturday, Jan. 7, from 10 a.m. to 4:30 p.m. to talk about job opportunities and how to apply for positions within their companies. Also, seminars:
10-11:30 - Filing for unemployment; finding jobs through social networking and free online resources.
1-2:30 p.m. - Write a hot resume. (Bring one you've been working on for advice.)
3-4:30 p.m. - How to play the interviewing game.
- Brad Haugaard

Monrovia's Foothill Unity Center reports on its Facebook page that THE Magazine (a Pasadena-area publication) has named it one of 50 inspiring charities. Here's the online magazine: http://goo.gl/eTXgg

~ According to reports I believe to be knowledgeable, Dogwood's Market, the produce market at Foothill and Acacia, is closing shortly, moving - I understand - to Diamond Bar.

~ And just a block to the east, Blockbuster Video at Foothill and Stedman is closing (or perhaps moving). All the videos in the store are for sale.

The 210 eastbound will be fully closed from midnight tonight to 5 a.m. Jan. 4 for work on the Gold Line bridge near the Santa Anita offramp.
- Brad Haugaard

[Monrovia Police activities from the Police Department's Neighborhood Watch Report for Dec. 29, 2011 - Jan. 1, 2012. - Brad Haugaard]
Possession of a Controlled Substance / Possession of Narcotics Paraphernalia - Suspect Arrested
On December 30 at 11:19 p.m., an officer on patrol observed a suspicious van driving slowly through a parking lot in the 100 block of South Myrtle.  The officer approached the van and observed a subject.  The subject made a furtive move toward his waist, lifted a small black object up and dropped it over a wall in front of him.  Once the subject was detained, the officer retrieved the black nylon bag the subject had dropped.  The bag contained a used glass pipe and about a gram of methamphetamine in a small container.  The suspect was arrested and charged with felony possession of a controlled substance.
Trespassing / Battery on a Peace Officer - Suspects Arrested
On December 31 at 4:56 a.m., officers responded to a residence in the 100 block of North May and located two subjects sleeping inside a vehicle in a garage.  The subjects did not live at the location.  They had been drinking and found an open garage and went inside to sleep.  Both subjects were arrested for trespassing and were taken into custody.  While at the police station, one of the suspects kicked an officer.  He was also charged with battery on a peace officer.  The officer was not injured.
Domestic Violence - Suspects Arrested
On January 1 at 2:21 a.m., officers responded to a residence in the 100 block of Norumbega on the report of a male and female fighting.  On arrival, officers found a husband and wife had gotten into a physical altercation and both had physical injuries. Both gave conflicting statements.  The officers arrested both the male and female for domestic violence as a dominant aggressor could not be determined based on statements.
Special Enforcement Team Activity
On December 28, Special Enforcement Team officers detained a suspicious subject in a business parking lot in the 700 block of East Huntington.  The subject was found to have an outstanding warrant for his arrest and had a radar detector in his possession.  He was arrested for the warrant and the radar detector was held for observation.

The Friends Store at the Monrovia Public Library has a limited number of "last chance" adult hardback and trade paperback books for 50 cents. Books may be added during the month, but everything goes at the end of each month, replaced by new books. Check the Always Open Annex shelves near the customer service desk of the library. Pay at the customer service desk or in the Friends Store. Every dollar supports the library.
- Brad Haugaard